The launch of 'The Street Scene' magazine in October 1985 was a god send to the likes of myself trying to find anything out about hip hop. It was 65p and came out on a weekly basis every Wednesday. At the time it was probably the only place you could find anything out about hip hop apart from the 'Blues and Soul' magazine. Street Sounds label owner Morgan Khan was the man behind it and the mag ran for I think approximately 20 issues before it was withdrawn from the shelves. Unfortunately the collapse of the Street Sounds label which soon followed was intiated by the costs of running the magazine as a whole. The contents of the magazine though covered all aspects of dance music at the time but most importantly to myself it had a dedicated hip hop page - Electro Talk which was included in the paper part of the magazine in the centre called Street Tips. I don't recall it being in the first few issues but once it appeared it was a haven for new releases, hip hop news and interviews. There was even a weekly chart which I checked each week ticking off the tracks I'd tracked down, either recorded off people, recorded off the radio or due to owning the vinyl. I used to love the interviews though in each issue as they were always accompanied by a photo or two of the artist. I was now able to see what the artists looked like and read about them as well as getting to listen to their music. Apart from the weekly hip hop page there would be occasional interviews with hip hop artists in the main mag and sometimes we were treated to them in full glossy colour !! I used to also check out the radio station guide, 'Radio Waves', each week in the hope that something local to Manchester was being broadcast. Unfortunately the only thing I could ever pick up in my bedroom was 'Taking Care of Business' with Mike Shaft which used to play a few hip hop tracks in the last 15 minutes of the show if you were lucky. The magazine also introduced me to the 80's soul/funk music scene where I learnt about the likes of Princess, The SOS Band, Cherrelle, Loose Ends to name a few. Each week I read these magazines from cover to cover eagerly waiting for the next issue. I used to treasure these magazines so I've no clue as to why I decided one day it would be a good idea to cut them all up and just take out the hip hop bits. Fortunately, unlike the magazines, I kept all the hip hop pages that came from within this outstanding magazine. Hopefully they may bring back a few memories to a few people. 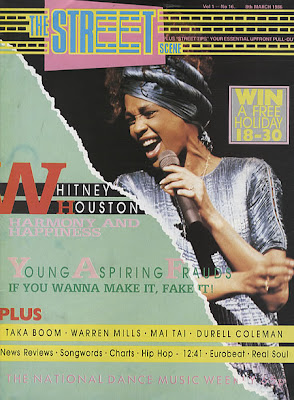 Cover from The Street Scene from 8th March 1986
The 'Radio Waves' guide
The National Dance Chart was always across the centre two pages of the main
mag and in later issues appeared in full colour. This one is week ending 15/12/85
Street Sounds ad from the Xmas/New Year edition 1985/86
I'll be honest I had no idea who Ralph Tee was back in 1985 but being only 15 at the time this is probably no surprise. He seemed to be everywhere in the mag and if my memory serves me right he regularly did the Upfront page. On posting this I thought I'd try to find out who Ralph Tee was and to my surprise found out that he currently DJ's on Jazz FM. before working on the Street Scene magazine he worked on the Blues and Soul magazine as the assistant editor. After The Street Scene magazine he went on to work at various record labels before eventually co-founding the successful Expansion Records label.
Posted by Mike C at 02:39