Short interview with Marley Marl. From 1988. 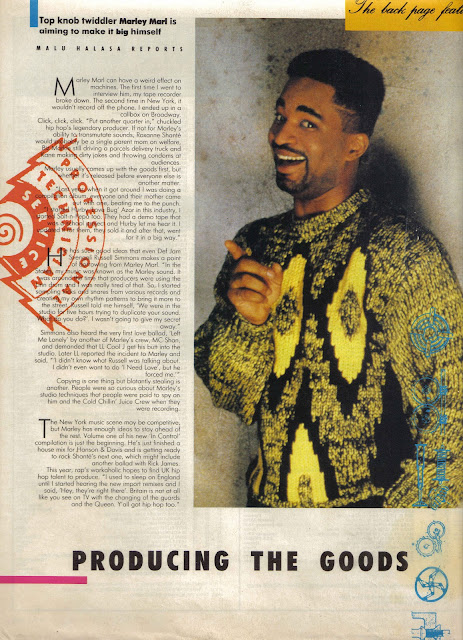 Interview with 3rd Bass about the release of 'Gas Face' together with a brief history on the group. From 1989. 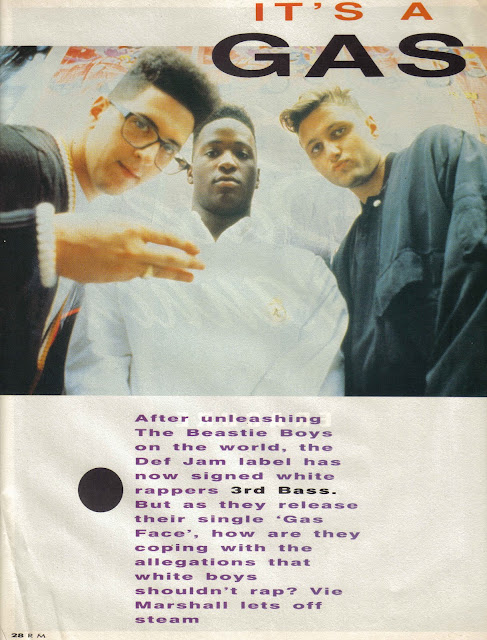 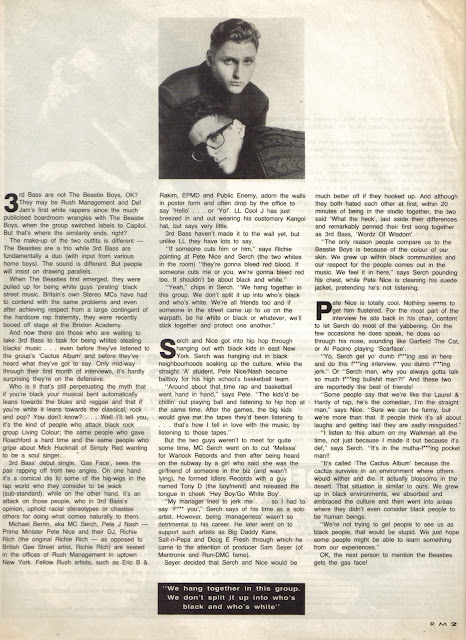 Not an interview with the Beastie Boys but a track by track run down of 'Paul's Boutique' by Mike Simpson who was one part of the Dust Brothers who produced the album. From 1989. 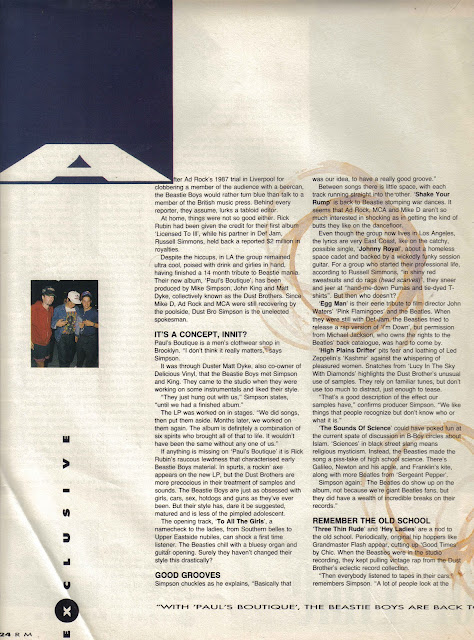 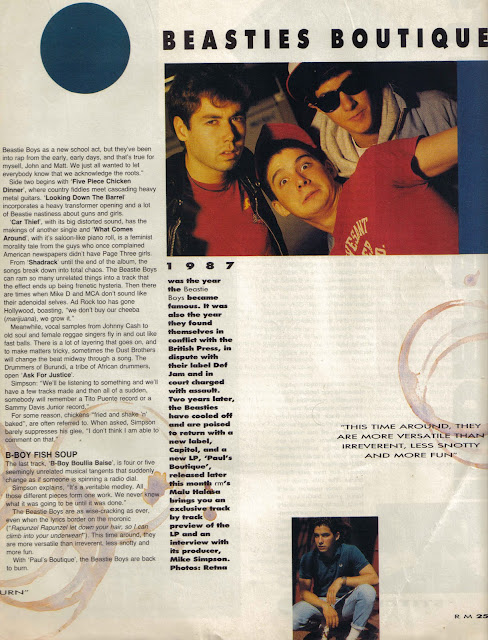 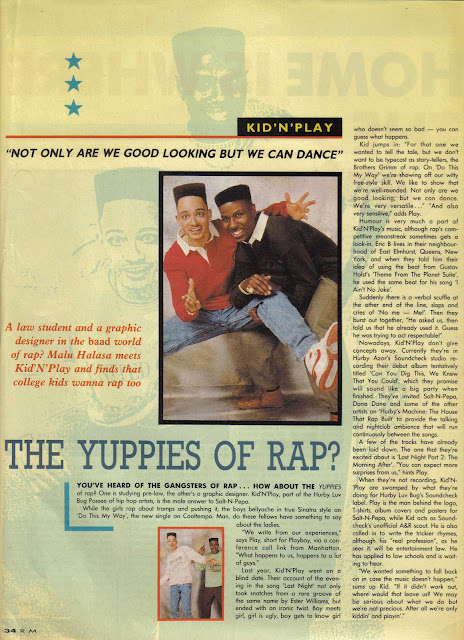 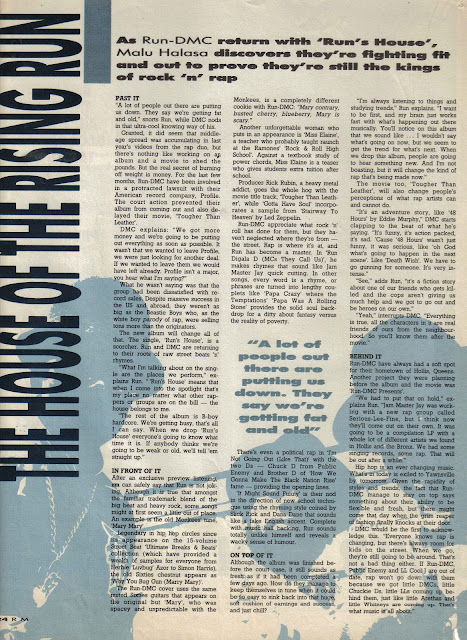 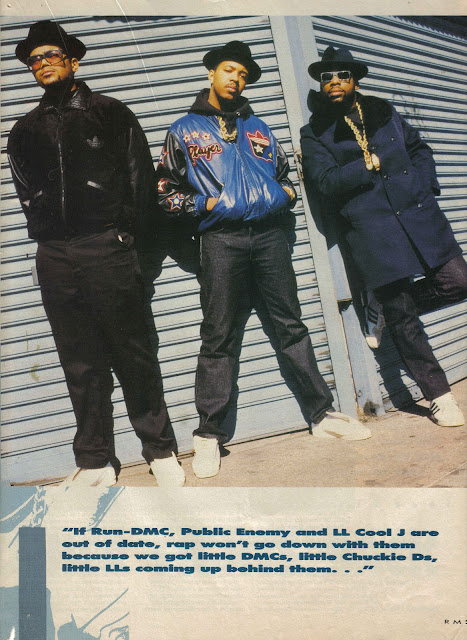 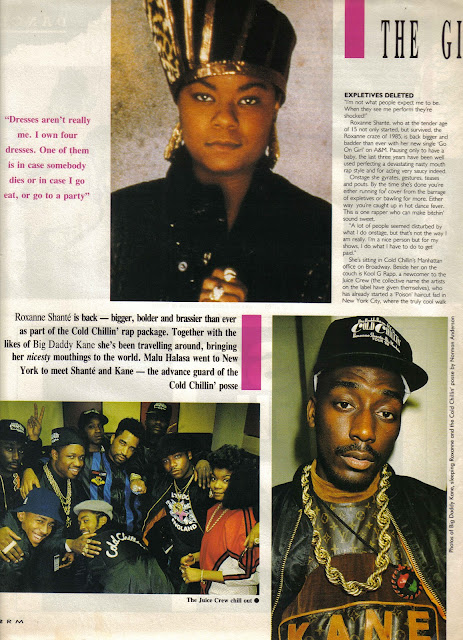 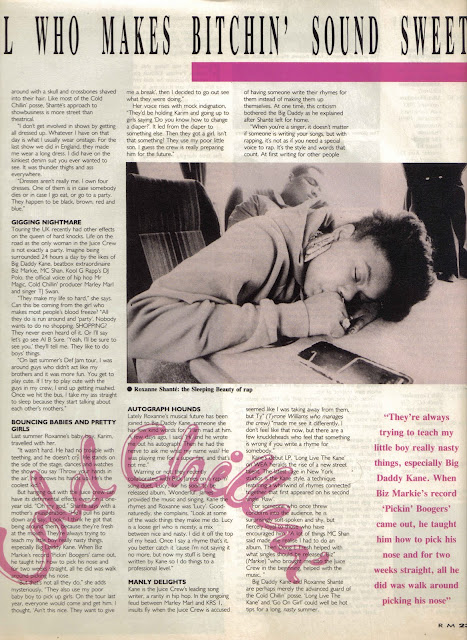 Q&A with the 'Godfather of Rap' Spoonie Gee. I'm guesssing at 1987 as I only had the early copies of the Soul Underground mag as this was when it was first released. 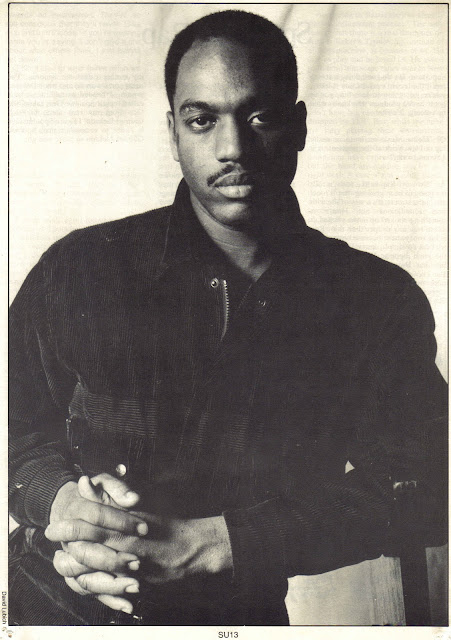 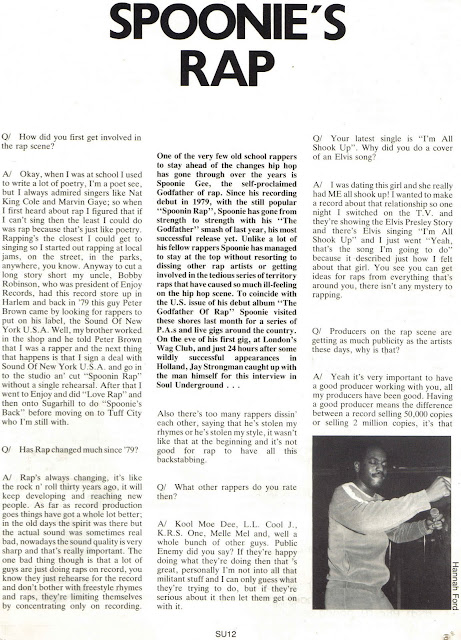 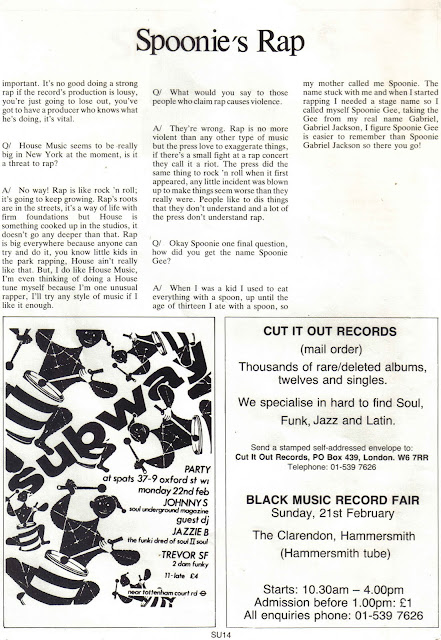 Short interview with MC Duke just after the release of his LP 'Organised Rhyme'. From 1989. 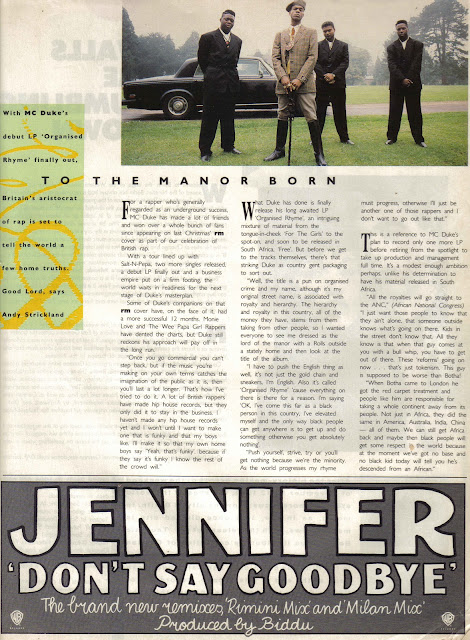 Article on Def Jam Records past, present and the future. From 1989. 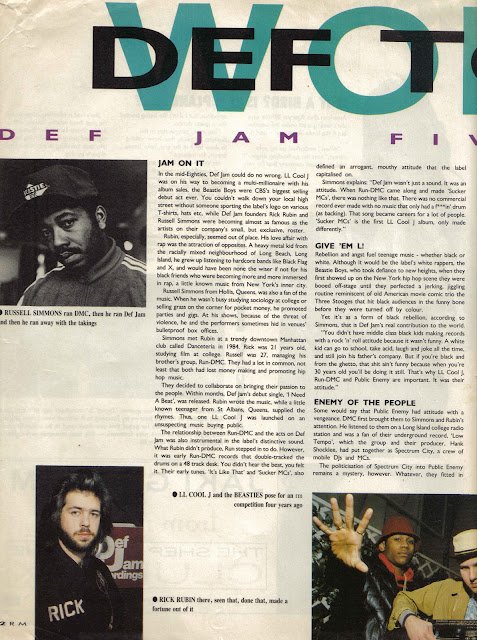 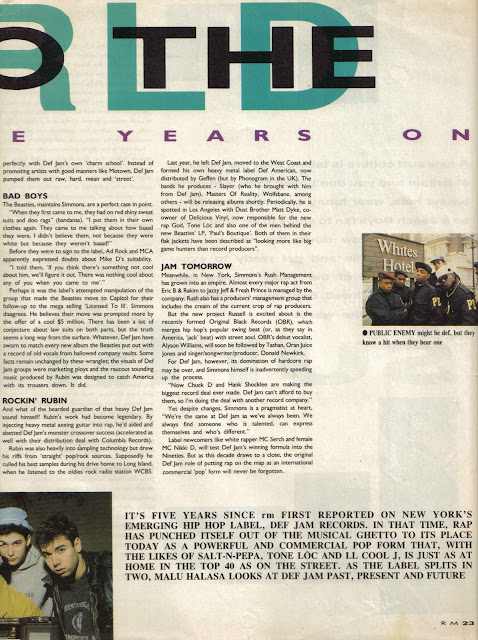 Interview with Morgan Khan from June 1987. Taken from Blues and Soul magazine he discusses his new label Westside after the collapse of the Street Sounds label. 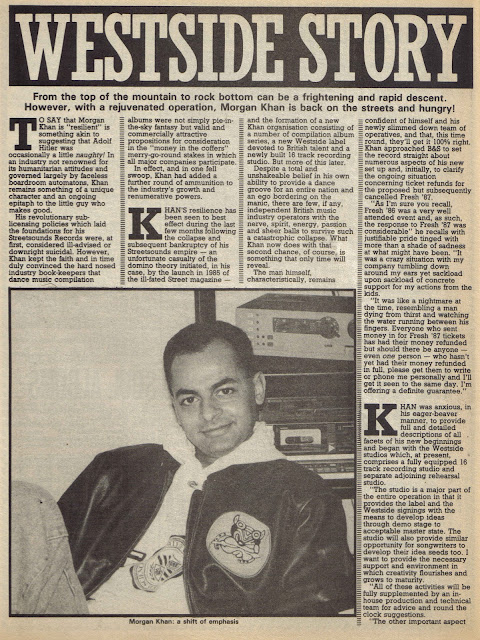 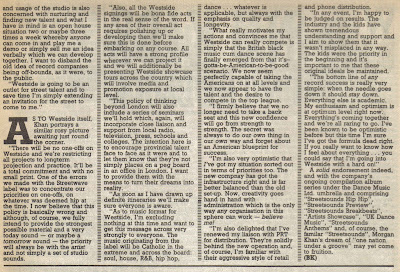 Q&A with Def Jam co-founder Rick Rubin. Discusses the start of the Def Jam label, The Beastie Boys, LL Cool J and the future of the label. From 1986. 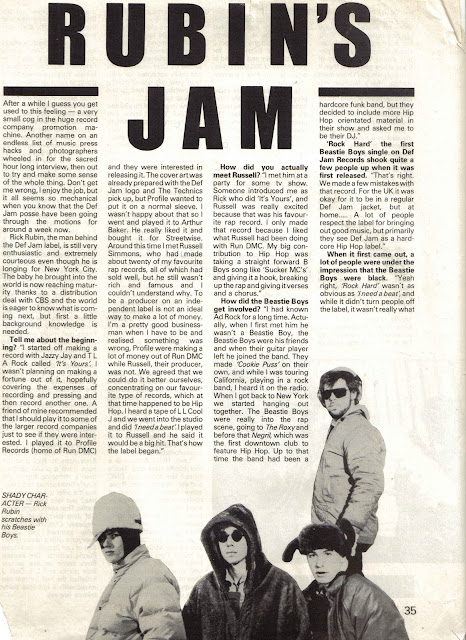 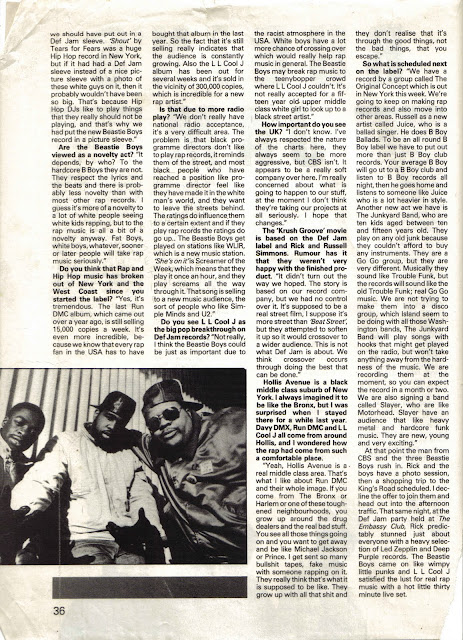 Interview with Whistle following the success of their single 'Just Buggin'. From 1986. 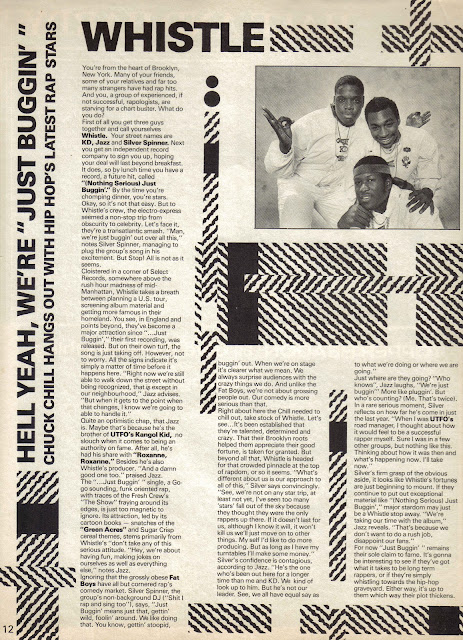 Interview with Mantronix discussing the upcoming 'Bassline' release. From 1986. 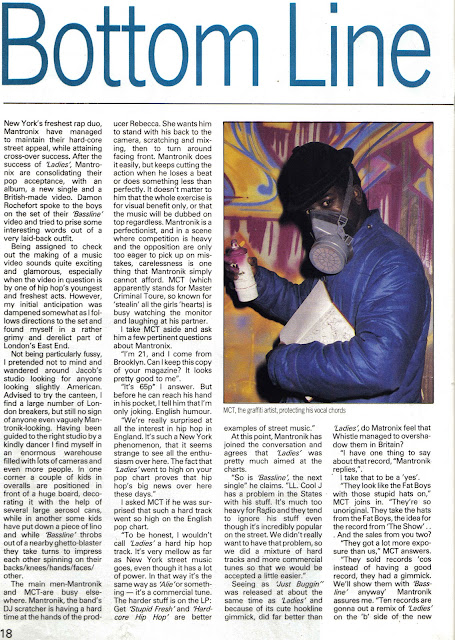 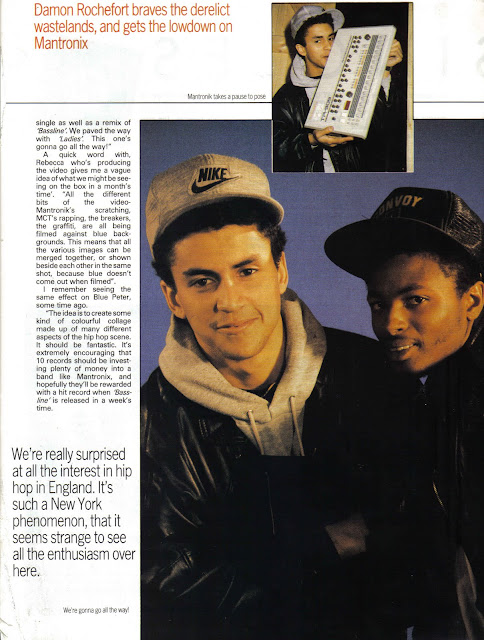 Write up on the Freestyle '85 event at Covent Garden's Jubilee Hall. 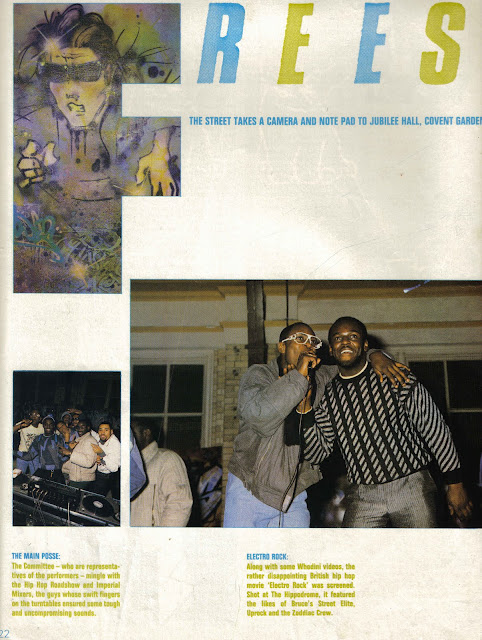 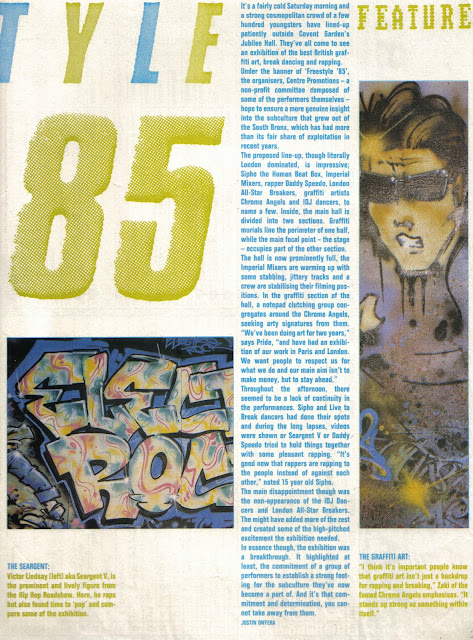 Informative interview with Kurtis Blow from early 1986 discussing his 'America' album and the Krush Groove movie as well as projects he was working on at the time. Below the interview is a short piece on him performing at The Tropicana Club, Peterborough. 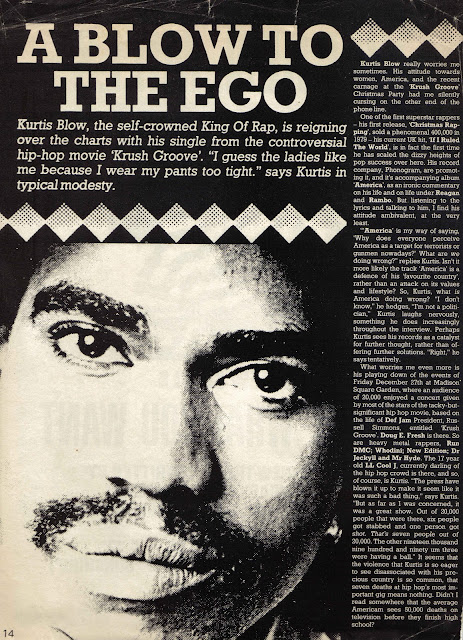 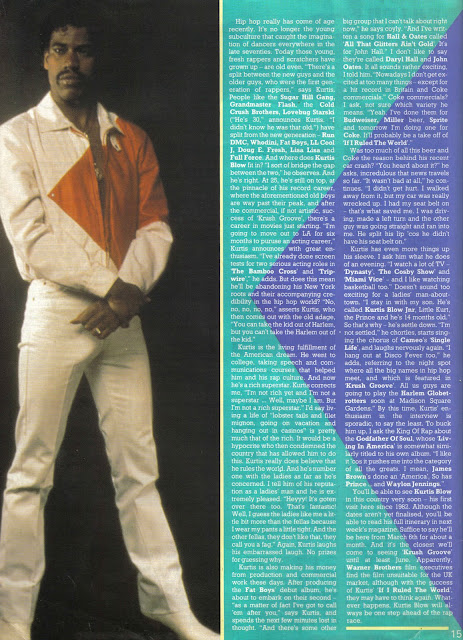 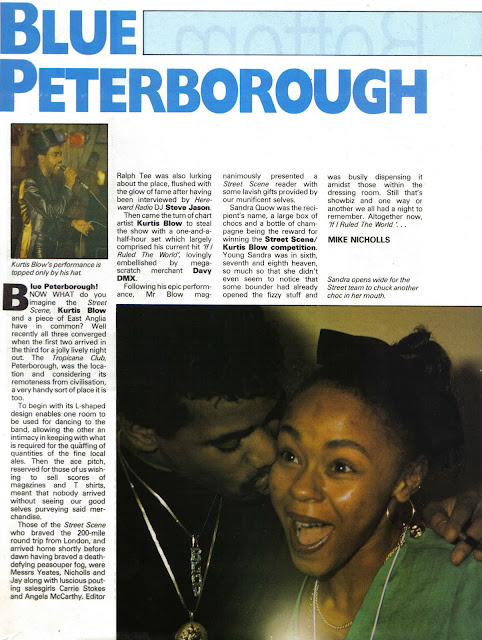 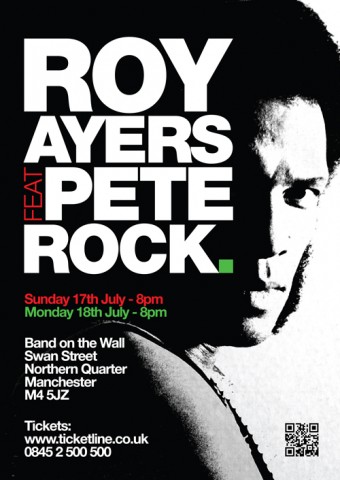 On another rainy Monday night in Manchester soul, funk and acid jazz giant Roy Ayers did the second of his two nights with hip hop legend Pete Rock at the Band On The Wall. The combination of the two had all the potential for a special night but it fell well, a bit flat. Don’t get me wrong it was a good night but it could have and should have been a lot better. Personally I was expecting a full live band playing Roy’s hits from the past with Pete Rock dropping in every now and again with some breaks and scratching. I wasn’t alone in thinking this as from listening to a few people after the night as they also expected the same. To start with there wasn’t even a full band, just Roy Ayers on vibraphone and vocals together with John Pressley who was also on vocals and probably the star on the night for both his awesome playing and on stage antics, Raeford Gaskins who was playing the saxophone. Pete Rock basically was the MC for the night hid behind his laptop and decks who would every now and again when he wasn’t checking or answering his phone chance his arm with a bit of crowd participation from behind the mic. Roy and his ‘band’ treated us to just five numbers, opening up with a 9 minutes of ‘Don’t Stop the Feeling’, followed by another near 9 minutes of ‘Searchin’ before finally finishing off his first section with ‘Everybody Loves The Sunshine’.  Pete Rock then took to the decks and played a quality soul and funk set, playing the likes of The Blackbirds, Cameo and Al Green for the next 30 minutes. All the time, to Roy and his ‘bands’ credit, they didn’t leave the stage for a break but stayed there for a bit of a boogie and sing along!! After Pete Rock’s set Roy then took over again and treated us to ‘Love Will Bring Us Back’ before finally finishing off with ‘Running Away’ which is pretty much what he did when the song finished as he just disappeared from the stage without a thank you or good night. I honestly don’t think anyone realized at this point that he wasn’t coming back on but he was probably forgotten about very quickly as soon as Pete Rock dropped ‘They Reminisce’. The crowd went absolutely mental, and quite rightly so to one of the greatest hip hop tracks ever, before Pete Rock wound the night down by playing a selection of his greatest hits. All in all like I said earlier it was a good night but not a great night and in case you wondered, yes it was still raining when it all finished. The clips of the night below are thanks to my mate Ian Walpole who was with me on the night and had a far better video on his phone than the one I had !! I've had to split some of the clips up into two due to the upload limit on this site. Enjoy !!
Pete Rock spinning the MP3's
'Everybody Loves The Sunshine' - Check out Roy and John Pressley
while Raeford plays his sax. Quality !!
'Everybody Loves The Sunshine' - continuation of the above clip.
'Running Away' - Star of the show Raeford Gaskins
showing off his sax playing skills !!
'Running Away' - second part of the above clip with
Roy getting funky on his vibraphone.
Pete Rock just before he drops 'They Reminisce' and the feedback
blows the mic on my phone.
Pete Rock on the decks scratching the night away !!
Short clip again of Pete Rock's soul and funk set.
Roy on vibraphone during 'Don't Stop The Feeling'.
Posted by Mike C at 00:20 No comments:

Each week in the Street Tips section of the mag was a page called Wicked Pulse. In all honesty I never really paid much attention to this page as I never had any idea what the records were they were talking about. The only time I recall to there being anything hop hop related was a Steinski interview which I've unusually lost and the page below on 1986 DMC Champion DJ Cheese with the final few paragraphs covering the final briefly. I've also put a page from the main mag below the DJ Cheese page which again briefly covers the 1986 championship.

Issue 20 was the last issue I was able to get my hands on. I've no idea if there were any issues after this one, all I do know is that despite searching I could never find one and the magazine was sorely missed by myself and no doubt hundreds of others. I'm sure if there were any more issues someone will hopefully point it out. In this final issue Chuck Chill interviews Grandmaster Flash and does his weekly 'Electro/Soul Report' together with the usual news, reveiws and weekly chart.

In this issue we find Chuck Chill chatting to Aleem as well as doing his now regular 'Electro/Soul Report' column. Also included were the usual reviews, news and weekly chart.

An Original Concept interview this week from Chuck Chill and some kind words from him regarding the UK scene at the time. The usual reveiws, news and chart included.